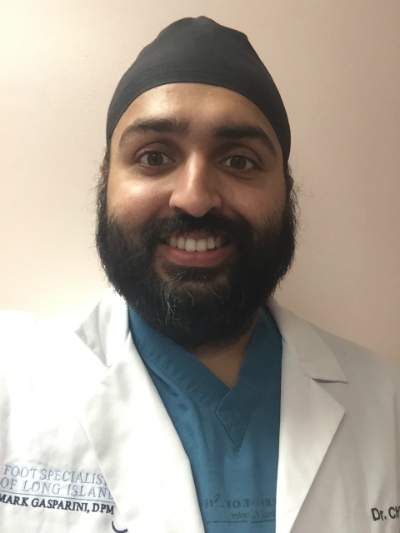 Novneet Chhabra, DPM is a board-certified doctor on staff at Foot Specialists of Long Island. Dr. Chhabra earned his doctorate in podiatric medicine (DPM) at the prestigious New York College of Podiatric Medicine in 2011 before he completed his 3-year surgical residency at Good Samaritan Hospital in 2014, exceeding all requirements. Dr. Chhabra ultimately completed his medical training at Wyckoff Heights Medical Center in 2015 by gaining a certification in wound care and hyperbaric medicine practices, and he maintains privileges at several of our local hospitals.

Dr. Chhabra graduated with honors from State University of New York at Stony Brook in 2007, earning his bachelor’s degrees in history and biology.

Dr. Chhabra has authored, along with two colleagues, an article discussing a rare case study regarding the effects of granulomatosis with polyangiitis on the lower extremity. The article was published in 2015’s volume 7 of The Journal of Diabetic Foot Complications. Additionally, a video he prepared for the Foundation of Podiatric Medicine’s medical research competition for student multimedia production was awarded 1st place. The video focused on the various phases of the gait cycle.

Dr. Chhabra has attended and been involved with numerous professional workshops and lectures, including:

There are many reasons Dr. Chhabra is a valuable addition to our practice, including the fact he speaks five different languages – English, Spanish, Hindi, Punjabi, and Urdu. This will enable a greater number of community members to receive the effective foot and ankle care they need.

When he was younger, Dr. Chhabra was quite active in athletics. He played striker on the soccer field, catcher behind the plate in baseball, power forward on the basketball court, and wide receiver on the football field. Being an athlete himself provided firsthand experience from a young age in sports injuries.

During his time away from the office, Dr. Chhabra enjoys traveling around the world, including experiences like viewing the Irish coast by train, driving on mountainous Swiss roads, and taking catamaran trips around Spain’s Pearl Islands.

To schedule your appointment with Dr. Chhabra, or to learn about any of the services we provide, simply call (516) 804-9038 or use our online form to contact us today.